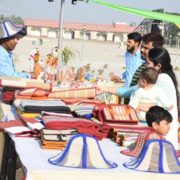 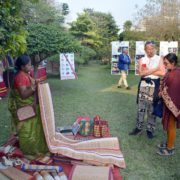 Barbasudevpur Deshapran Pragati Sangha
It was established with the support of Narendrapur Ramkrishna Mission with the objective of village education and livelihood development in Barbasudevpur village of Bhagawanpur I Block, Purba Medinipur. The focus of their work was to impart non formal education and nutrition to the children of disadvantaged families. They started to train local women on weaving madur and sell them at various Govt. sponsored fairs and festivals. They were suppliers to the Govt. sponsored outlets such as Manjusha. Several women of the nearby villages have benefited from the intervention as their income levels have risen.

Belun Hasta Shilpa Kuthi Society
The man behind forming this society, Mr. Arun Khatua, is an extremely skilled craftsman and started his own business from the year 1999. The society was established in 2010. Several women of the nearby villages have been trained on how to dye, stitch and finish madurkathi products. The quality of products being made in this village of Pingla block, Paschim Medinipur has been acclaimed in the segment of madur products. The society supplies regularly to Fair Trade organisations such as Sasha as well as art galleries and handicraft outlets in major Indian cities.